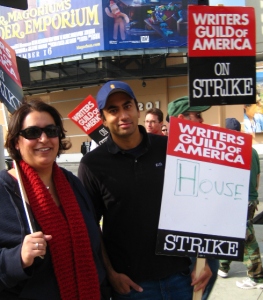 Largest WGA Strike Rally of Week One at Fox

Parts of Pico and Avenue of the Stars in front of the West Hollywood gates of Fox Studios were shut down between 10am and 12:30pm Friday as 3,500 writers and their supporters rallied for the fifth day of the WGA strike. Their objective today was to get the attention of the AMPTP (Association of Motion Picture and Television Producers) and demand a deal with the group.

20 years ago, the WGA willingly took a cut on their share of VHS and DVD sales in order to help grow the format. They now feel they’ve done their part, been fooled in a way, and want to establish their fair share of the millions of dollars in profits the studios now reap. From a $19 DVD sale, writers get 4 cents – they want another 4 cents from the now dominant home video format ad also want royalties on the burgeoning internet and iTunes distribution markets. Another 4 cents doesn’t seem like a lot considering the statistic that roughly 48% of WGA members are unemployed at any given time.

On Thursday, a corporate email went out to Fox employees alerting them of the impending strike. It read, “Please be advised that the Writers Guild of America will be conducting a large strike rally with between 2,000 and 4,000 participants outside the Fox studio on Friday…. Such rallies as this are considered normal when a union is on strike…. If there are large gatherings of people around lot or plaza entrance gates, please remain calm and courteous as you enter the facility.” (Hollywood Reporter)

The Teamsters are also expected to honor the WGA picket lines by not crossing them. This would have a major effect on TV shoots and other productions underway on studio soundstages citywide. (Hollywood Reporter)

As I walked toward the large crowd of red shirts gathered on the corner, a news helicopter hovered frozen in the sky overhead, transmitting the images of the writers marching up and down the sidewalks below. A few strikers brought instruments with them to entertain others or merely themselves as they milled about with their signs: one writer stood with a black electric guitar slung around his shoulder and when asked why he didn’t plug it in, he replied that he hadn’t found anywhere to plug it in yet; one writer drummed a drum; another writer walked by playing “When The Saints Go Marching In” on a saxophone (which I hummed involuntarily the entire walk back to my car).

Photographers with their large, beige telescope lenses walked along side the moving masses snapping an occasional shot of the festivities. Or at least it seemed like festivities. It was a full-out media attraction, which was exactly the intent of the organizers.

Cardboard boxes of food and danishes sat on the bright green grass between the sidewalk the street, orange beverage dispensers were set up on tables as refreshment for the Guild members in attendance, and countless signs waited upside down, stacked around the base of a tree, ready to be grabbed and hoisted. Anyone could easily walk right up and join right in. Some made their own signs, none of which were without a twist of humor or wit: WGA Rules!; Suck My Pencil!; an image of Mr. Burns with an evil grin holding an AMPTP picket sign, a digitally altered photo of President and COO of Fox Entertainment Peter Chernin giving the bird.
Spirits were high. Lively conversations and laughter emanated from groups of 3, 4, 5 or more strikers standing in circles, chatting.

One circle contained Bill Prady (pictured), creator and executive producer of The Big Bang Theory. Crossing the lot entrance gate, I spotted Kal Penn (Harold and Kumar Go to White Castle, National Lampoon’s Van Wilder, Superman Returns) and some fellow colleagues from House, and I asked them for a quick picture. Kal was very friendly and when asked why he was here, said that he felt it was important to be there as a SAG member supporting the writers he worked with on the show.

Norman Lear, the legendary writer and producer who produced such popular sitcoms as All in the Family, Sanford and Son, One Day at a Time, was also in attendance Friday speaking to the press.

The rally died down slightly at 12:30pm, but many strikers still remained, walking up and down the sidewalks with their signs. No longer held back by police road blocks, cars and trucks began passing by, blaring their horns in solidarity.

TV show runners, most of which are also writers and WGA members, turned out Wednesday to support the strike. Below are a few clips posted on YouTube of the event featuring Carlton Cuse from Lost, several writers from the Office, as well as other hit shows.

[All Photos – Property of TheTwoCents.com. Do not use without permission.]

This is the archive site for all of TwoCentsTV posts. Look for the full archive to be up January 2018.